Swan turned out a lot of pens with no number.  I’m not sure why that should be the case.  Maybe they thought it wasn’t especially important, or maybe there was another reason, unfathomable to us now down the long stretch of years.

Despite the lack of a model number this pen can be dated to the war years by the centrally-positioned swan in the barrel imprint.  It’s a big beast, 13.8cm capped and of course there’s that trowel-like No 6 nib.  Though there are spots of wear here and there the gold plating is generally good and the pen is free of  cracks, scratches and bite-marks. 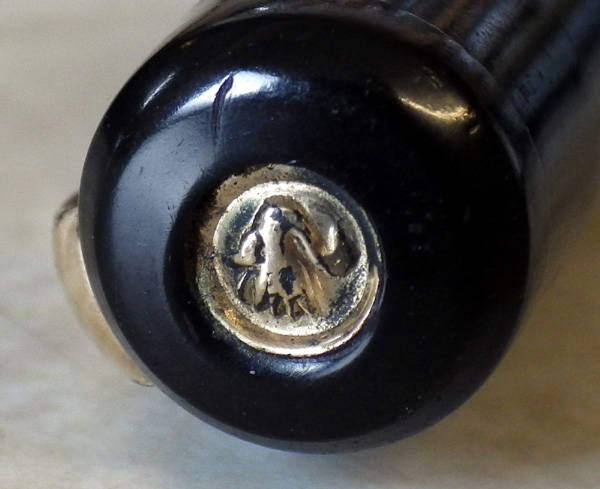 The gold Swan emblem on the top of the cap is unusually clear and clean.  The barrel imprint could have been done yesterday, so sharp and clear is it.

It’s big and it’s dignified in its solid black.  The three rings and gold Swan emblem reinforce this suggestion of opulence under reserve.  This is the pen of a man of status (and in those days it invariably was a man) to whom the distance from those under him was important and should be made evident.  It marked him out as a leader in just the same way as did his bespoke tailoring, his Rover,  or even Bentley did.

Of course we believe ourselves to be more democratic these days, but we still enjoy the craftsmanship of a surpassingly well-made pen.

5 thoughts on “A Large No-Number Swan”