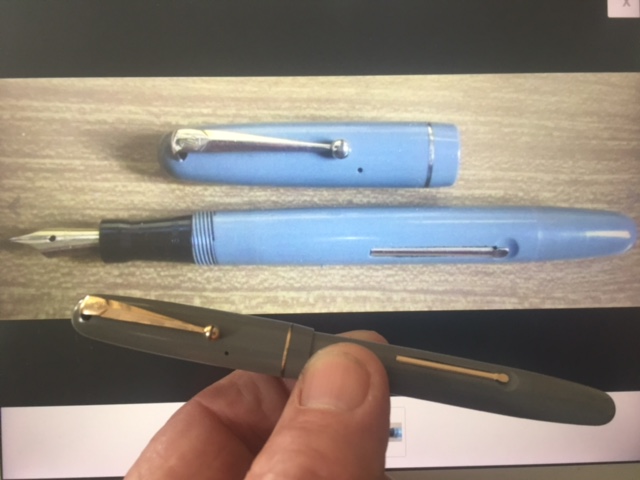 Rob P kindly provided me with these photographs of the same pen. The bottom one is accurate. These extreme variations often cause problems for buyers who discover that the rare colour they thought they were buying turns out to be something duller and more common.

It’s hard to imagine that such a difference from the real colour can be entirely innocent. Differences in uncalibrated monitors can account for a certain amount of colour change but not this much. It looks like very bright light with a blue cast is responsible.

It happens mostly with the paler pens. It’s easier to decide what colour patterns should be. I would think that such an unreal picture would be the basis for returning a pen – after all, you’re not getting what you have every reason to think you should.

Of course PhotoShop and similar programs can be used to make a pen appear any colour but they can also easily restore accurate colour to an image with a colour cast or overexposure. The one exception I have found is in some of Parker’s English Duofold range of the mid-20th century. Greens in those materials that Parker used can be impossible to photograph accurately, usually appearing blue.

If a photograph leaps off the screen at you and is clearly a previously undiscovered colour in a Swan, think twice. It most likely isn’t.