I recently picked up this Geha Schulfuller. At first glance it appears the same as the one I have had for many years. Setting them side-by-side, however, the new one is obviously larger. When measured my own one is 12.4 cm and the other 13.3 cm and proportionately thicker. The difference is too great for them both to be the same model but there is nothing on either to indicate a model name or number. Both are just Schulfullers. 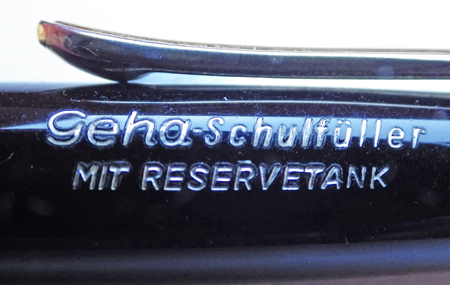 Reading about these pens I discovered that most, supposedly, have a serial number on the cap or barrel. This was so that each child knew his or her pen, Gehas being so common in the classrooms in Germany. Neither of mine has such a number.

As I have said elsewhere in the blog, Geha was a serious competitor in the German market until finally taken over by Pelikan in 1990, when the brand was discontinued.