I don’t usually have Wearevers. They are not common in Britain and most of those I see I don’t want. There are exceptions though.

Wearever was part of David Kahn Inc. Their business model seems to have been to make pens as cheaply as possible and sell in great quantity. This worked, in the sense that Wearever made more pens than any other manufacturer and doubtless David Kahn Inc made a lot of money. Quality suffered, of course, and many bad Wearevers were made. The company was making pens from injection moulded plastic as early as the 1920s and those pens were especially subject to shrinkage and discolouring.

The exceptions were several ranges of pens made in the 1940s. I cannot assign a model name to this pen but it is acceptably well-made. The parts fit together well, the design is attractive and the pearl and black celluloid is beautiful. As expected the gold wash on the metal parts has mostly vanished but I don’t think that detracts from the appearance too much. 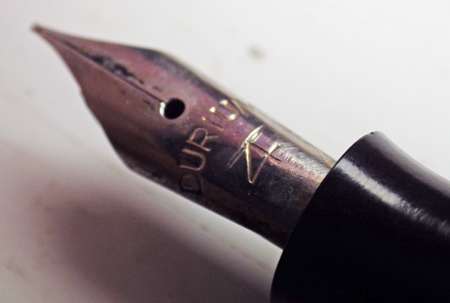 The original steel Wearever nib was worn to the point where it could not be used. It was surprisingly difficult to find a replacement that fitted well. I have several gold nibs that would have fitted but they would have been inappropriate. In the end I found a steel nib of a similar age to the pen and that fitted the feed as if it had been made for it.

This is an example, like several others I have written about, of a cheap pen that has worked well and given good service. The beauty is a bonus!