In the 60s the main Japanese pen manufacturers – and some smaller ones – developed a new kind of pocket pen with a long cap and a barrel just long enough to contain a cartridge. These “long-shorts” came in at all price points. Some were dignified and opulent with black barrels and sterling silver caps. Others were more colourful.

Of course the long-short was a configuration that had been tried before. Diamond Point, among others, had tried this form of pocket pen as a bulb filler in the 1920s. None of the earlier attempts achieved the success that the Japanese made of the style.

This example is by Platinum. It has an 18 carat EF nib. In every respect it is a typical long-short. I have seen this model identified as a Platinum 200 and PKA-500 is also applied to it. So far as I can tell it’s a 70s pen. Though it is quite pretty with a metal cap and turquoise barrel/section, the selling point for these pens is, as is always the case with Japanese pens, the nib. Hair’s-breadth fine yet completely smooth, it delivers ink consistently with no pressure at all. There is no hard starting or skipping. It may be a small pen but it doesn’t really feel like one in the hand.

All three major Japanese manufacturers produced long-shorts in all sorts of colours and patterns, which makes them very collectable today. Not for me, though. I wanted to try one, the nicest one I could find, to see if it is a pen I can write with. It is.

(My apologies for the photographs. The metallic finish is intensely light reflective and very annoying to try to capture. I tried various setups and this was the best I could do!) 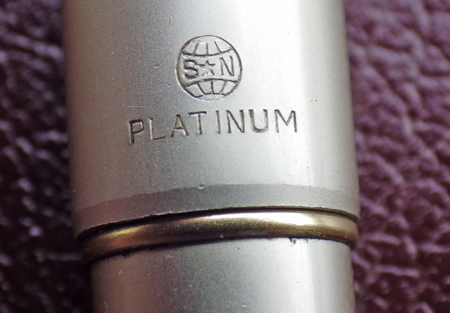