In the lore of modern pens, Sailors are said by many to have the best nibs. I’m not talking about flexibility here, just about the ability to glide across the paper in a pleasing and accurate way. I bought a Sailor Sapporo a year or so ago. It wasn’t an expensive pen by the standards of those who buy limited editions, but it was expensive for me. I don’t remember exactly what I paid for it but it was in the region of what I would normally lay out on a very high quality vintage pen.

In many ways it should be my ideal pen. I love the look of it and it sits well in my hand. It’s a small pen but I have small hands so we are in agreement there. A few days ago I saw it in its box and I wondered why I didn’t use it more. I inked it up and made use of it for a day or two. I know now why I don’t use it much. It drags unpleasantly on the paper. I’m not talking about normal feedback. The cheapo Wing Sung I’m writing this with has plenty of feedback and I love it. The Sapporo isn’t quite a paper-cutter but it’s just not right. I’ve had a look at the tines under magnification and they are perfectly aligned so there is no improvement I can make there. That means that I’m going to have to polish the tipping material, something I avoid like the plague in my everyday restoration of pens. Some highly skilled technician put the right amount of expensive tipping material on the pen, whether it’s now or back in the 1920s, and I don’t believe it’s a good idea to take it off again. Also, if you use an abrasive to polish the nib tip and make it address the paper sweetly, you may be widening the contact area. The pen is a fine which is what I want it to be. I don’t want it to be one whit wider than it is. Of course, if that were to happen, I know how to reshape it to become fine again. That means more removal of iridium. 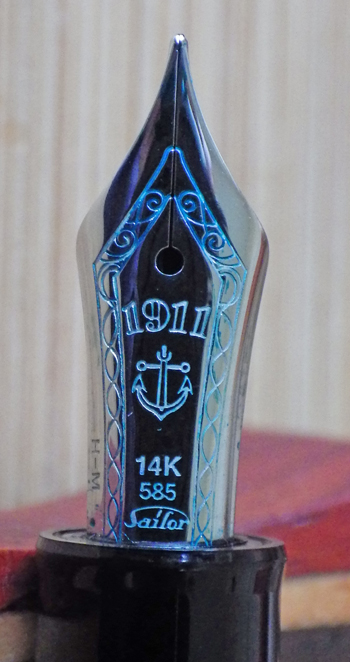 This isn’t a great tragedy of course. I can fix the pen. I’ll use the most gentle abrasive I have and it may well be that I can improve the nib to an acceptable smoothness without affecting any of its other attributes.

But I am disappointed. I feel that it should be a better pen than it is. I have other modern Japanese pens that have worked splendidly right out of the box. I hear tell that Sailor should be even better than the Pilots and Platinums. Maybe I got a Friday afternoon pen. It encourages me to believe that I need to give up buying modern pens and stick with the Swans, Watermans and Onotos that I know to be great writers and totally reliable.