I used my cheap Chinese piston filler for a month. Considering how much I write, that was a good test and it passed with flying colours. Chinese pens have come of age – or at least some of them have.

It was time for a change and I cast around for something totally different and found it in the form of this Platignum Varsity. It came in a batch of pens I bought some time ago and being virtually unsaleable it had been lying around my workshop ever since. All I had to do to it was flush the old ink out of it and fill it with new.

The Varsity is a range of pens rather than an individual model. I’ve had one or two of them before and I think this is a later one. There’s a hint of the Parker 61 in the barrel end jewel, steel cap and general shape. The clip with a central cut-out is vaguely Sheafferish. It’s a squeeze-filler called a Pressmatic. So far as I can see, it still has its original sac, so it must be something similar to Parker’s Pli-Glass. The nib is steel and two-tone, part being gold-plated. It has a good lump of tipping material. It’s marked “M” for medium but is actually closer to a fine which suits me well. I do feel a little deprived in one way; the piston filler held a bucketful of ink whereas this fairly short approximately No 16 sac needs frequent filling. Otherwise this is a great pen. I do love it when the cheap and disregarded pens work well. 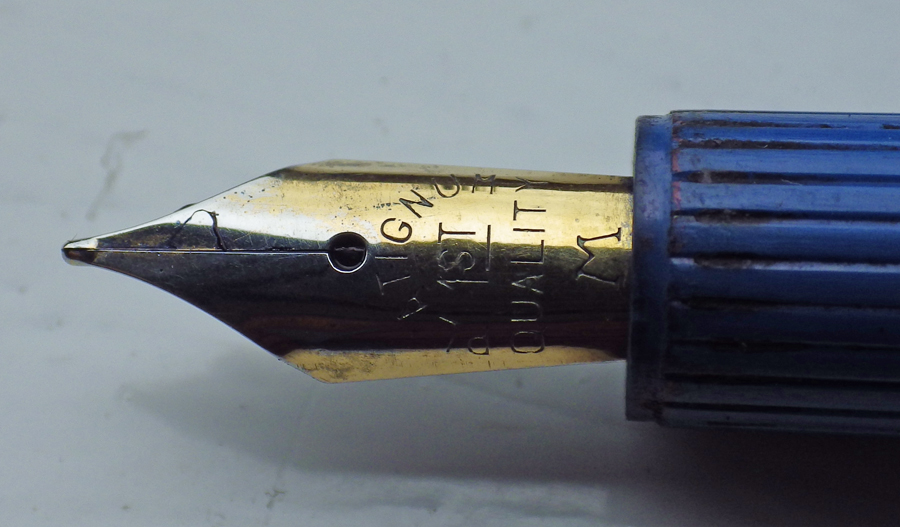 Platignum’s poor reputation is generally deserved but there are exceptions. During the 60s and 70s (near as I can tell) they made quite unassuming pens that you might never notice but which bore gold nibs and were good writers without the usual Platignum leaking problems. They were sac fillers too. Briefly, Platignum was licensed to make a clone of Waterman’s X-pen and that’s a much underrated pen too.

Historically, as Mentmore’s largest sub-brand, Platignum was established to provide inexpensive pens for those who couldn’t afford the gold-nib pens offered by the more famous brands. The story is told that originally the intention was to name the brand “Platinum” but whichever government agency controlled these things, said that the pens could not be assigned the name of an element, hence the inclusion of what was intended to be a silent “G”. Everybody says it with the “G” now. Evidently the Japanese authorities saw nothing wrong in branding pens with the name of an element.

Many of Platignum’s cheap 1920s and 30s pens have not survived at all and some turn up in a condition beyond economic repair. When you get a good one, particularly those in mottled hard rubber, they are attractive pens and were obviously very good value for money when new. The weak point is the steel nib these pens were issued with. They were subject to corrosion and even those that survived the rather harsh inks of the day wore out quite quickly as they had no tipping material, just a folded tip. They quite often turn up with replacement Osmiroid 35 nibs, a good combination.

Post-war, Platignum produced a variety of pens in various qualities. The very cheap cartridge-fill school pens were very bad, notoriously leaky and a danger to clothes and schoolbags. However, like Osmiroid and Burnham, they produced rather better pens that accepted a range of screw-in calligraphic nibs. These nibs are still available in eBay and though they have a different thread from Osmiroid and Esterbrook they still offer a viable alternative for the calligrapher.

I’m not really suggesting that Platignum is due a reassessment or should become the latest collector’s choice (though their attractive 30s and 40s pen and pencil sets in pretty boxes are collected) but with careful selection one can find good daily users among their output.

Like the other low-cost pens, they form a larger part of pen history than we realise, because though a great many were sold they were not highly valued and most were discarded, unlike the Conway Stewarts, Swans and Onotos.

One thought on “Platignum Again”