I bought a lot of pens for spares just after Christmas and they arrived yesterday. There were some Platignums and other disposable pens among them and that was what I wanted. I pull the pressure bars out of those pens and throw the rest away. Cruel, I know – spare parts surgery, but necessary. Things have come to a strange pass when it is cheaper to buy whole pens than new pressure bars!

There were several Chinese pens in the lot as well. I’ll be trying some of them. Today it’s a Hero 329. Someone had filled it with black ink of incredible density. I flushed it and flushed it and flushed it until my thumb dropped off and I had to go over to the surgery to have them stitch it back on but that ink was still there. After some more flushing I managed to get it down to a pale grey. I had to settle for that because the muscles in my arm were bulging like Popeye’s. I filled the pen with some less brutal ink and write-tested. I was delighted to find that it was a European fine and it wrote superbly – no skipping or inconsistency. It’s light, which I like and nicely balanced when it’s posted. 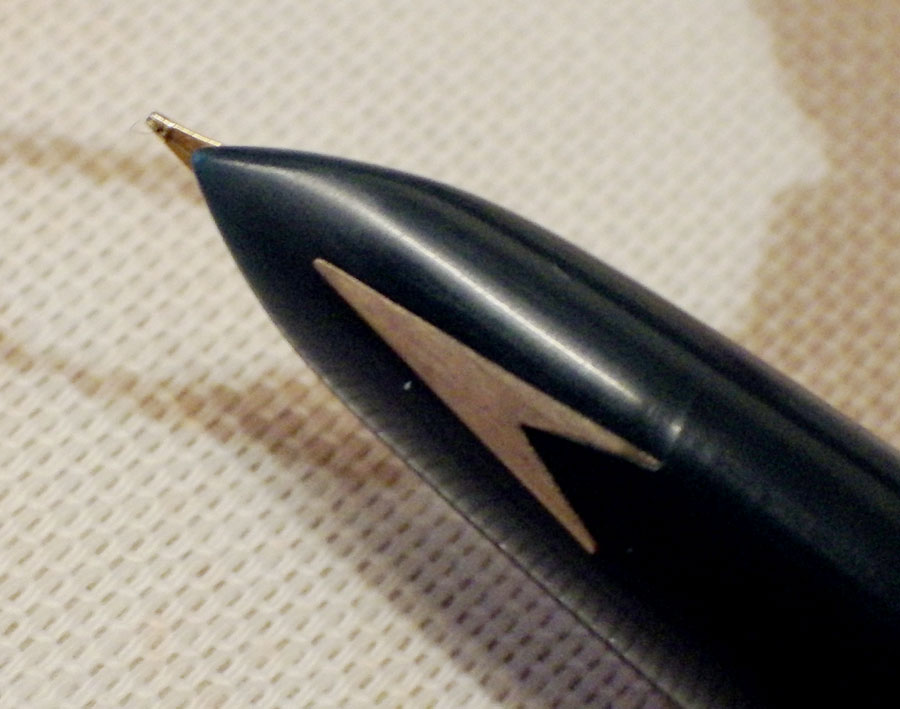 It has an arrow on the hood – can you say Parker 61? Actually, in size and behaviour it’s more like a Parker 21. The arrow is of course shocking plagiarism but at least the clip is plain and not in the least Parker-arrow-like. As you will see, the barrel is a pleasant green and the cap makes no attempt to disguise the fact that it is stainless steel. It’s not a huge pen at 13.7 cm long capped. The cap slips on and clicks against the barrel ring. It works well and closes the pen properly. The nib, I’m sure, is steel. It has a squeeze-type filler. Some people refer to these as aerometric fillers but take it from me that they are not and the very suggestion is a dreadful insult to Parker. These are squeeze-fillers that manage at best a half fill. Proper aerometrics have a breather tube and fill the sac completely.

Though the pen is in very good condition it seems to me likely that it was bought some time ago. I haven’t seen these 329s with the arrow on the hood for quite some time. Interesting, because now it’s quite hard to buy a Chinese pen with a fine nib. If you look for them in eBay you’ll find nothing but mediums. It’s like the sellers have come to the conclusion that all Westerners dislike fine and extra fine nibs. But no, Chinese friends! Take note that there is at least one here who likes her pens fine or even finer than fine.

I’ll continue to use this pen over the next few days to see if there are drying-out problems. Of course it will take a little longer to find out about durability. I’ve had Chinese pens (and some other rather more expensive ones) that fell apart in a few months.