Long, long ago when the world was young and so was I it seemed that almost everybody smoked.  Those cigarettes had to be lit with something, and many of them were lit with Colibri cigarette lighters.  They were middle-range lighters, neither the most expensive but not cheap either, and that seems to be the place in the market occupied by their fountain pens today.  The one I have here turned up in a lot that I bought.  It’s a gold-filled pen, slender and straight sided in a 70s or more likely 80s style.  It closes with a pleasing snap and it has a nice tight clip with a protrusion underneath to grasp the material firmly.  The nib is plated and the pen has a piston-type converter fitted.

It will post but unless you keep it upright the cap will fall off.  Allowing for that, it’s a very pleasant pen to use.  It isn’t heavy for a metal pen and the black plastic section provides an adequate grip.  The nib which bears the Colibri name is plated and is a very smooth firm medium. 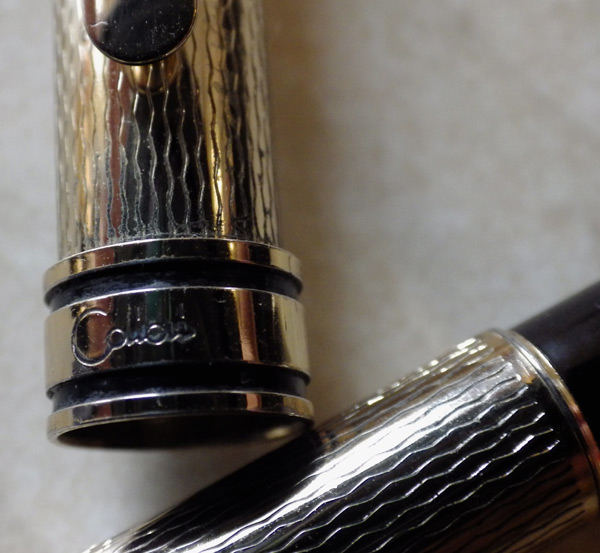 I have handled quite a lot of modern or modernish pens recently and the differences between them seem to be no more than cosmetic.  This pen could have been made by anyone from China to Europe or America and without the name it would be impossible to tell who the manufacturer was.  That’s true of so many of them.  Apart from the name on the cap lip there is nothing about this pen that would say it is a Colibri.

I can tell a 1950s Swan from a Conway Stewart, Mentmore, Onoto or Burnham at 50 paces.  Put it in my hand blindfold and I’ll have a good and probably successful try at telling you which it is by its shape and feel.  That’s no longer the case with many pens today.  They look and feel alike and are pretty much anonymous.  I don’t say that applies to them all – I haven’t tried them all!

Having said all that, this is, in its way, an excellent pen.  It does everything as it should and lays a perfect line, neither too wet nor too dry with complete reliability.  It’s unlikely to lead you to experiment with your handwriting or try to improve it but it will write whenever you want it to with all the style, character and elan of a Crystal Bic.