I wrote about English-made Ingersoll pens once before, back here: http://wp.me/p17T6K-3T.  That post gives some of the background to these mysterious pens.

This pen appears to have been made later, perhaps the nineteen-fifties, or maybe it’s just the superb condition that makes it appear later than it is. It has the curious mid-cap fitting for the clip, but that gives no clue as it appears from time to time from the nineteen-twenties on.  The chunky section with a decided step harks back to that earlier model.

The rather splendid warranted nib is unusual.  I read somewhere (can’t remember where) that some later Ingersolls were made by Wyvern.  Wyvern had their own nib-making capability and may have made such a nib.

In any case, it’s an attractive and very unusual pen.

Edit:  With thanks to Simon (Waudok) 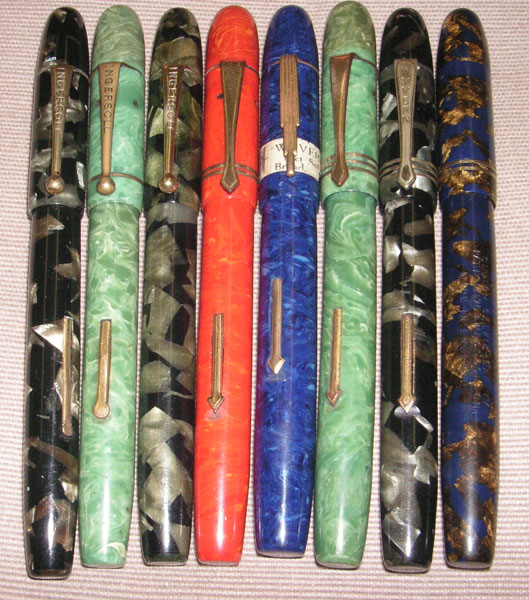 This picture shows why I think Ingersoll’s were made by Wyvern. The 3 on the left are Ingersolls, the other 5 are all Wyverns. I have quite a few of this model Wyvern in these 5 colours but with different cap band configurations, and also shorter pens. I also have this model as a Kenbar (store pen for Barkers of Kensington), The City Pen from Spooners of Plymouth and some other advertising pens such as Earle’s Cement. I think I also saw one called a Regent pen on the Melbourne Pens site a few years ago.

The model names change over the years, I think the earliest is the Wyvern No 60, Clutch Selfil-Safety, Pat151753, WP Co, London (e.g. the Orange one); the Jade one is a Wyvern No 7N; and the Lapis one is a Wyvern Perfect Pen, No 81. There is also a shorter No 5, and shorter pens with an S instead of the N suffix.

By the way, the section of your other Ingersoll looks like a Wyvern section to me as well.