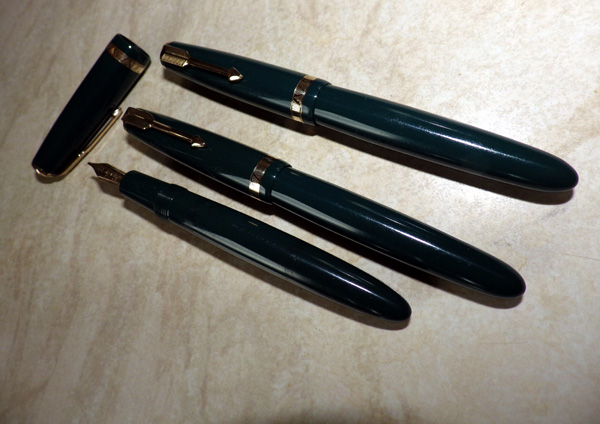 There are one or two interesting things about the green Demi.  One is that none of my cameras (and I’ve had a few) could ever capture a green Demi in its true colour which is British Racing Green, near enough.  It always comes out somewhat bluer than that, often almost teal, which is most misleading.

The other great mystery is why a huge majority of a Demis are green.  You see the very occasional black or blue one, hardly ever a red, but the glorious greens are everywhere.  Why’s that then?  Was it a thing in the fifties?  Something everyone knew about, never spoke about and absolutely never wrote down?  Was it something proud mothers instructed their debutante daughters in, very quietly, “Never appear too intelligent, dahling.  Men can’t stand brainy women.  Make sure you always have a spare handkerchief for emergencies.  Oh, and keep a Parker Demi in your purse.  Green, mind.  Never black, red or blue.  They so non-U, dear.”

Or maybe it was a recognition thing.  Bond casually opens his jacket to show the green Demi clipped to his inside pocket (none of that geeky pens-in-the-handkerchief pocket for Bond).  With a scarcely perceptible nod his contact hands over the valise containing the blueprints to the latest Soviet super-reactor.

There’s a lot of green Demis around, anyway.  And I like them.  Very much.