This pencil commemorates twenty-five years of the reign of George V, his Silver Jubilee. It is purple, the colour associated with royalty. Most noticeable is the finial in the shape of a crown.

George V was how we seem to like our royalty: conventional, dull and non-intellectual. His only passion was stamp collecting. However, he did establish the standards which royalty have attempted to adhere to ever since, George VI and the present Queen with some success, others less so. Within a year George V was dead and succeeded by Edward VIII who tore up those standards and stamped on them.

Getting back to the pencil, it’s hexagonal and one of the facets indicates that the pencil was issued by Wanstead and Woodford Urban District Council. Like George V that august body is long gone. It disappeared in the reorganisation of 1965. 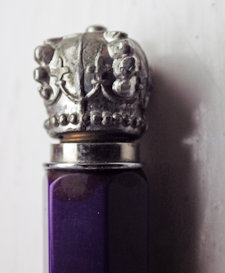 At first glance I would not have taken the pencil to be more than seventy years old. The colour and design seem more modern. It isn’t a cheap giveaway as most commemorative items are. It’s well made and must have been comparatively expensive.