Here we are again with another modern Chinese pen. I’m sure I said some time ago that I wouldn’t buy any more. I relented for several reasons and I expect I’ll do so again. The reasons: I’d heard good things about PenBBS and Moonman nibs. I already have one or two decent Chinese nibs and I wanted to try another. Secondly it wasn’t going to break the bank or be a huge concern if it proved defective. Also I have readers who are interested in these things and should not always be deprived. The penultimate reason is that despite its garishness I like the acrylic. Almost all acrylics appear garish when compared with the subtlety of marbled pattern celluloid or casein.

But here’s the big reason, the elephant in the room! Is it possible for a Chinese company to make a pen more like a current Duofold? I have regularly defended Chinese pen manufacturers against the accusation of plagiarism. After all there are so many pen shapes around that it is nearly impossible to come up with a pen that doesn’t resemble one of them, and it isn’t only the Chinese who fall foul of that difficulty. This, however, is of a different order. Even the dimensions, though not quite close enough to allow swapping components, are very close indeed. It isn’t a fake. Moonman put their name to it. But there can be no question that they are maximising their sales by offering a Duofold for people who can’t, or don’t want to, afford a Duofold! 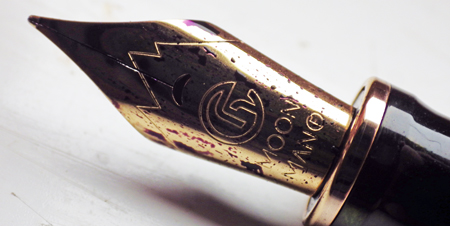 That said, assessing the pen as a pen, it’s very good value for money. These recent Chinese pens are much better and provide real competition to Western and Japanese pens, for those who are buying pens to write with. The pen comes with a converter. All the parts seem to fit together well. The nib is splendid – absolutely fault-free. My only complaint about it is that it is a Western fine rather than an Oriental one. Something that might prove a little annoying is that it takes 2 3/4 turns of the cap to close the pen – not a note-taker, then.

In all, a very good pen. Not the first example of plagiarism and I’m sure it won’t be the last. Quite shocking in its cheek. And not unamusing.