Everything that happens is a sales opportunity for someone. When World War II broke out, Parker Canada produced these pen and pencil sets marked, “Parker Active Service Set.” They were marketed throughout Britain and the Commonwealth. This is a Challenger set. Vacumatic sets were offered for sale in the same way.

It is easy to imagine wives, girlfriends, sisters and mothers buying these sets for their men as they enlisted or were called up. The purchase of the pen and pencil set was a vital matter – these were to be the means of communication in the dark years ahead.

This is the later version of the Challenger with the tapered clip. At 12.2 cm this is the Slender version. The pen and pencil, in black and grey marble, are discreetly beautiful. The set is in very good condition. They have been well used but looked after. The nib has appreciable flexibility. 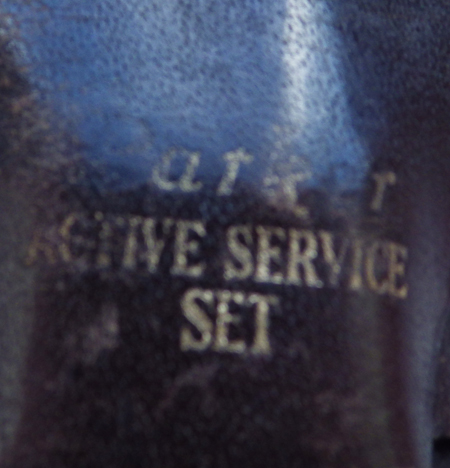 The leather pouch is also in very good condition. The leather is thin, smooth and flexible with long handling. Though the history of this set has been irretrievably lost, it is more than likely that it was carried into some distant theatre of war. It is to be hoped that they returned with their owner rather than being sent back with his possessions.

Many years have passed since peace was declared at the end of World War II. It has drifted beyond memory and has become history, like the Crimean War or the Peninsular Campaign, but an object like this brings those violent years back with immediacy