Senator has been around for a long time and was once one of Germany’s most prolific pen makers. The company still exists, making marketing ballpoints. I don’t think they make fountain pens any more but I’m willing to be corrected if I’m wrong. In any case, NOS examples turn up fairly frequently in a variety of packages.

This is the Senator Regent. I’ve seen various production dates for this pen but sixties or seventies appears to be a reasonable guess. It’s a piston filler and a very good one. Removing the blind cap exposes a turn button. Some people appear to have mistakenly taken the view that this indicates an integral piston converter but this is not so. It’s a real piston filler. The pen has a green ink window (not visible in the photographs because it’s full of ink) and the plated steel nib unscrews. The general appearance is quite old-fashioned. It’s more like a nineteen thirties pen. 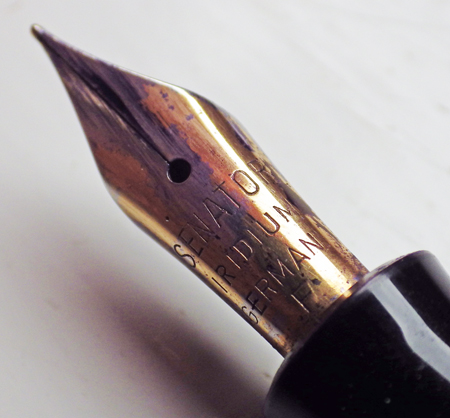 Senators, including the Regent, have a strong following, mostly because of their good steel nibs and reliable performance. I know one artist who will use no other fountain pen. I rather like them myself.

I have been unable to get a full history for Senator and most German pen manufacturers have been amalgamated with others or taken over at least once. The most striking thing about the Regent is how closely it resembles an earlier form of the Tropen Scholar. Shape, clip and style are very similar – it’s the same pen with different branding! I understand that this form of Tropen is still manufactured and sold in the Far East.

I’m sure that the explanation is common knowledge to German pen enthusiasts.