I buy cheap modern pens – European, Japanese and Chinese – out of curiosity. Most, I have to say, are good writers though not exceptional in any way. Having tried them and perhaps written about them I sell them on or give them away.

I was preparing to get rid of this Baoer 388 and write-tested it to remind myself how it wrote. I haven’t used it, beyond playing with it a little when it arrived. On re-testing it I realised that it wasn’t my usual fine point. It’s an oblique, and thereby hangs a tale.

I remembered that I bought this pen because the seller offered an oblique. Obliques, in the vintage pens I normally use, must have been differentiated from other points at a fairly early stage of manufacture, being a stub ground to either the left or right oblique. This pen is different and I can see how the seller could offer the oblique at the same price (or perhaps a very little more, I don’t remember) as the medium or fine. They have taken a medium point and ground one side down into a slope. This they call an oblique and I cannot argue; it’s an oblique. It’s not a good oblique though. Because of the way the grind is made, it’s hard to find how to hold the pen. It’s not like what I would call a proper oblique where the only way to hold the pen is exactly the way a user of an oblique would want. It also has rather more feedback than I would wish. 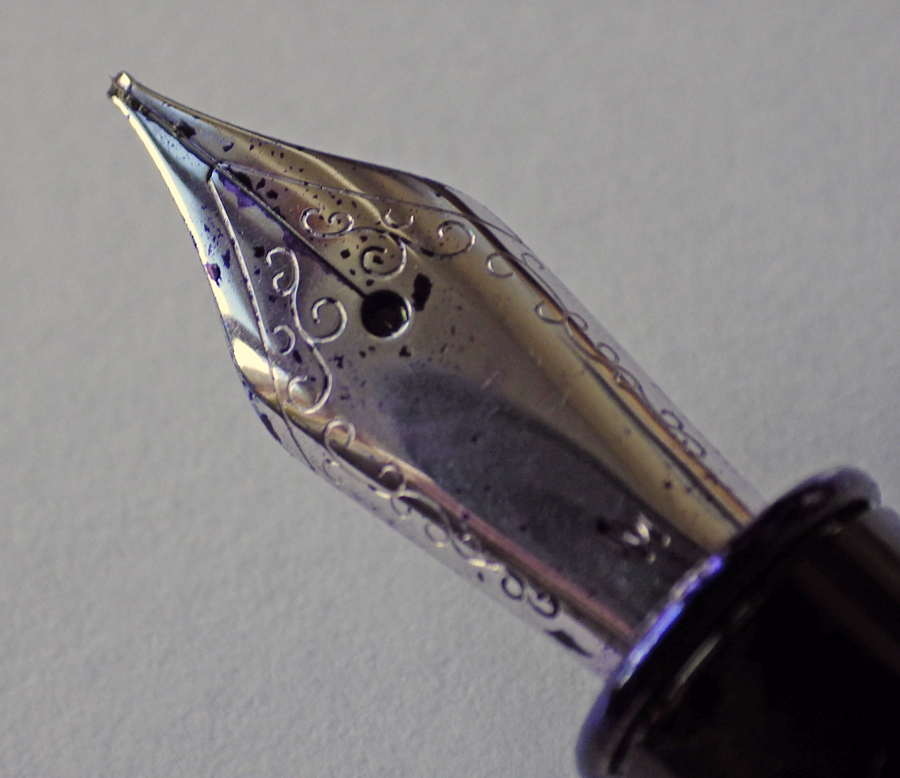 It’s quite unsatisfactory as it stands but I believe it has potential. I would like to explore this way of making an oblique to see if with a bit of work it could be brought to an acceptable condition.

The Baoer 388 is, I understand, a shameless copy of one of the modern Parkers. I’m not familiar enough with recent Parkers to say which one. To my mind it’s one of the more old-fashioned Chinese pens, being made of lacquered brass, a construction they seem to be moving away from. Other Chinese pens I have bought in the last year or two are either made from plastic or much lighter metal. This is not a huge pen but it’s heavier than I’m comfortable with and completely unmanageable posted.

The pen closes firmly but without an actual clutch. What I believe happens is that the expanded end of the section slides over the inner cap which then holds the cap in place. Initially the inner cap takes a fearsome hold of the section, requiring the application of much muscle power to remove the cap. This puts unbearable stress on the plastic inner cap which eventually cracks. It’s then much easier to cap and open the pen but eventually it will wear to the point where the cap falls off.

As it has been reshaped I can’t say much more about the nib. There’s no maker’s name on it. The pen came with a converter of the piston type. It works well but I’ve had these converters fall apart before. I will treat it with caution! The pen has a red and black stripe which I don’t find appealing. The furniture is gold-coloured and well finished. There are worse pens around, I have to say. I believe that Baoer pens are rebadged Wing Sungs. There must be a reason for doing that but it escapes me.