I’m sure I’ve written about the Waterman 52 before but as it’s a superb pen it’ll do no harm to eulogise it again.

Its immediate ancestor was the Waterman 12, and when the company brought out their lever filler it became the 52, the five denoting the lever filling system and the two for the size of the nib. 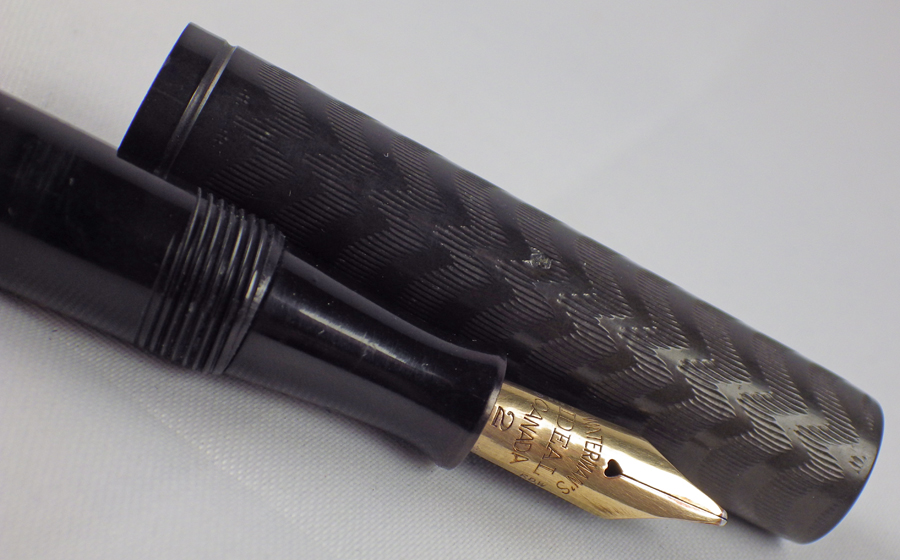 When you find a black one these days it’s usually quite faded and if it’s chased the pattern is well-worn.  This one has retained its original blackness and the chasing is sharp.  Perhaps it wasn’t used very much because it had a damaged nib.  The pen is US-made but it now has a Canadian flexible stub nib, a real beauty.

52s as you may be aware, came in a variety of guises.  There was the plain black hard rubber, then the chased version, like this one.  Rather rarer and more desirable are red hard rubber versions and the lovely ripple hard rubber in different colours.  If you wanted to spend a bit more you could have various cap and barrel bands and the most expensive models were encased in gold or silver overlays.

I like hard rubber.  It’s a great material and I’m grateful to Waterman for sticking with it as long as they did and making so many pens from it.  It didn’t do the company any good though, as the public wanted patterened celluloid by the 30s, and Waterman sales went into decline.  By the time they changed they had lost market share and they never quite recovered from it.  They made a celluloid 52 – same shape and size and same nib but for me it lacks the character of the hard rubber version.

The Waterman 52 was not an expensive pen when it was new.  Rather, it was a good quality pen for everyman.  Now as David Isaacson noted in his excellent blog* a couple of years ago, it has become an expensive pen.  This is due to the mistaken belief that all Waterman 52s have flexible nibs.  Some do, most don’t, but even a faded and battered example will cost you considerably more than a good one would have done a few years ago.

Pen prices are rising across the board, but the present high demand for pens with flexible nibs has distorted the market.  Various modern manufacturers are offering what they describe as flexible nibs but so far none of them approach vintage pens in that quality.  I really hope that someone comes up with a very good flexible nib soon, so that we can get back to a situation where the only people chasing vintage pens are those who really want vintage pens, not just a flexible nib.  I even hear of people putting vintage flexible nibs in modern pens.  For me that’s just desecration.