I bought a bunch of pens in a lot. There was nothing terribly exciting in it but it was cheap. There was a Waterman CF, a pen that I like, a Queensway with a stub nib and two Selsdons. I like Selsdons though their pens are often low-cost and it shows. They made some fairly decent ones too along with usable pencils. They appear to have experimented with plastics with some success. Selsdons generally restore well.

When the batch of pens arrived, the Selsdons were ballpoints! The seller hadn’t chosen to mention that and the pens were closed in the photographs. I considered returning them but I’d paid so little that I could bear the disappointment over the Selsdons.

Anyway, they proved quite interesting. According to the accompanying bit of paper, these ballpoints were made in 1948. That’s early days for ballpoints and they were not particularly reliable then. When I opened them, they were a mess of ink which had leaked out of the refill into the barrel. The refill is at least twice as wide as any modern one.

Though there is no money in it – ballpoint collectors are few and far between – I would love to bring these old ballpoints back to working condition. I’ve ordered a couple of refills that look as though they could be adapted to fit. 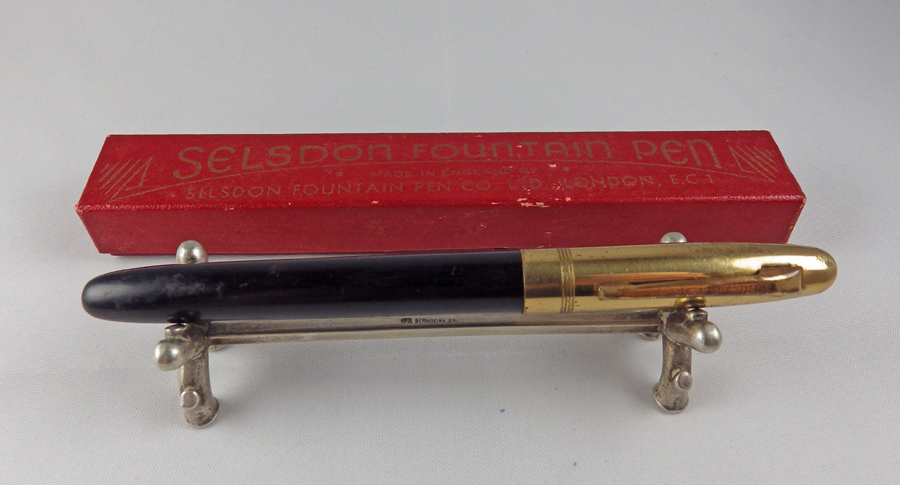 They are very like the fountain pens of the day in appearance, with their tapered barrels and gold coloured caps, held by a clutch ring. They actually look quite elegant, though I suppose they didn’t work well for long, based on the leaking in the barrel.

It didn’t take long before ballpoints began to assume a distinct shape of their own. It was in the 50s, I think, that Mentmore invented the clicky ballpoint with a point that came out and in of the barrel operated by a button on the base of the pen. Then Bic and Staedtler reduced the ballpoint to its absolute basics and gave the world a ballpoint that was made to be thrown away when the ink was used up. That doesn’t seem such a good idea now, in this polluted world.

I expect that Selsdon ballpoints were moderately expensive and the company expected that they would be treasured by their owners for years, replacing refills fairly frequently (they are quite short). Perhaps they were.