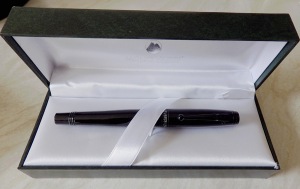 There are several reasons why I shouldn’t like this pen: it’s quite heavy at 41g.  It has a large step between the barrel and the section, something I usually dislike as it’s often uncomfortable and just seems like a bad piece of design.  The nib is an absolute nail.  I haven’t come across such a rigid nib since I had a Rotring Insignia, and you could have dug the garden with that! 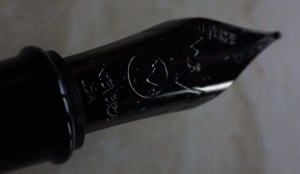 Having said all that, I really like this pen.  It has a lot going for it.  Aesthetically, it appeals because of its deep, deep blackness, so black that it seems to draw in all surrounding light like a black hole.  It’s called the Stealth and doubtless the colour is why.  It has to be said that there is something vaguely ludicrous about a stealth pen.  A stealth bomber, yes, that makes sense.  You want to slip quietly into the target under the enemy’s radar so it helps to be stealthy.  But a stealth pen?  How does that work?  Where is the benefit?  Anyway, that said, it’s a very pretty pen.  I’m not sure how the finish is achieved but it’s one of the shiniest things I have ever seen!

Its torpedo shape allows it to post very well and despite its weight it feels balanced when it’s posted and it isn’t tiring to use.  Unlike most modern pens it has a screw on cap.  I like that.  The black nib is covered with mountains in profile and it tells you twice that it is a Monteverde, lest you forget.  On the top of the cap there is a mountain peak, which reminds you of a certain litigious manufacturer’s logo but it’s actually quite unlike that bird splat. 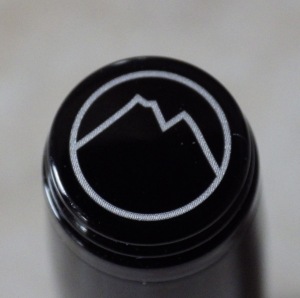 It’s a cartridge/converter of course, though I wish it wasn’t.  It’s one thing that lets this modern pen down and makes it inferior to most of the pens I deal with.  I wish more modern manufacturers would have the courage to make self-filling pens, but of course if they did they would use it as an excuse to charge even more money than they do – not that the construction of a simple lever or a button filler justifies the kind of cost that is applied by companies like, for instance, the modern Conway Stewart.

That diatribe aside, this is a great pen.  It’s well-made, satisfying in use and it doesn’t cost a king’s ransom.  I bought it out of curiosity with the expectation that, having examined it, I would sell it on but I don’t think that’s going to happen.  I think it’s going to stay with me.