Here’s a very handsome Waterman 513 set.  It’s in a striated version of the Tiger’s Eye colours, an exceptionally beautiful combination of honey and brown.  The 513 is a standard-sized pen, 13cm capped.  It’s paired with an equally attractive and (to me) unusual pencil.  It’s part of Waterman’s less expensive range – you’ll not that it doesn’t have a lever box.

There’s quite a bit of confusion over these pens with the Art Deco stepped clip.  They end up being called Stalwarts, 513s or W3s.  They’re made to slightly different specs in the USA, Canada and Britain.  To be absolutely precise this particular Canadian pen is just a Waterman Ideal with no number or name assigned to it, but as it meets the specification of a 513 we might get away with calling it that.  The 513 is the 1948 version with two cap rings and a 2A or W-2A nib.  Nibs give rise to alot of confusion and this pen isn’t an exception in that.  It has an Ideal No 2 nib which is certainly a replacement.  It’s actually an older nib, commonly found in the Waterman 52.  I’ve also seen 513s bearing W3 nibs and that’s wrong too.  The W3 nib is fitted to the W3 pen, a much later though not dissimilar pen turned out in 1955, so that nib’s a replacement too.  Why so many replacements?  I don’t know.  The 2A nib has always seemed a perfectly good nib to me, as robust as any other Waterman nib, and coming in the full range of nib types from flex to nail, with the occasional stub or oblique.

If all that hasn’t made your head spin you now have the story on these post-war Watermans.  The 512 is a slightly cheaper version with a single cap ring.  The 515 is a bigger beast with an impressive, often flexible nib.  The W2, 3 and 5 are later pens.  Some people try to find an equivalence between these pens and the Stalwart.  If it doesn’t say Stalwart on it, it isn’t a Stalwart.  Simple as that.  I don’t know why people want to insist that these are Stalwarts – perhaps they prefer names to numbers.  There is enough similarity to allow for confusion but it’s important not to run them all together. 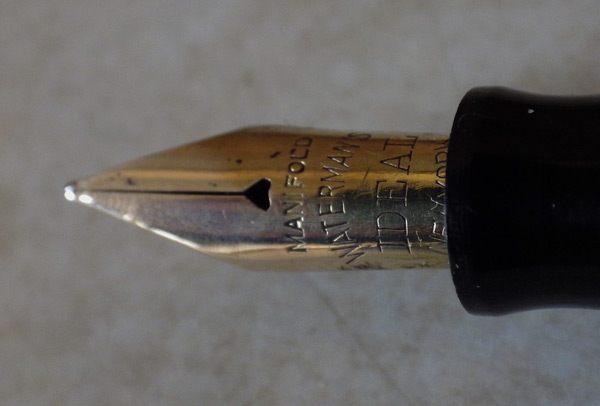 Anyway, I’ve had this pen and pencil set for quite a while and I’ve written with the pen quite a bit.  The nib isn’t flexible but it’s smooth, making it a nice pen to write with.  The pen and pencil came in the leather case and I assume it’s original.  It’s the right age.