Like the 68 I wrote about yesterday, this 150 is a late, downmarket pen. A year or two ago these later Conway Stewarts would hardly sell at any price but I see that’s no longer the case. There are two reasons for buying these pens, (a) to complete your collection of Conway Stewarts or (b) to fix it up to write with. After all, they have good gold nibs and the filling system is usually easily repaired. Conway Stewart insisted on calling it a Pressac filler but really it doesn’t merit another name. It’s just a squeeze filler. The sac housing is just thin sheet steel with a chrome layer and it’s particularly prone to rusting. That’s OK. It’s inside the pen when in use. You don’t have to look at it. Even if it had rusted through I suspect that cobbling a replacement together wouldn’t be too taxing on the ingenuity.

This pen is more traditional than the 68. It retains the usual Conway Stewart streamlined shape and the cap is screw-on rather than the clutch type. I popped a new sac in and it writes like a dream, quite stubbish like the 68.

It’s a shabby pen, though. The clip once had a gold wash but of course that didn’t last long. A little reminder of it can still be seen in the impressed letters. The cap is scratched where the clip rotated against it. The plastic seems especially soft and has a waxy feel to it, like an Osmiroid 65. The cap ring has not only lost its gold wash; the layer beneath is eroding away also. 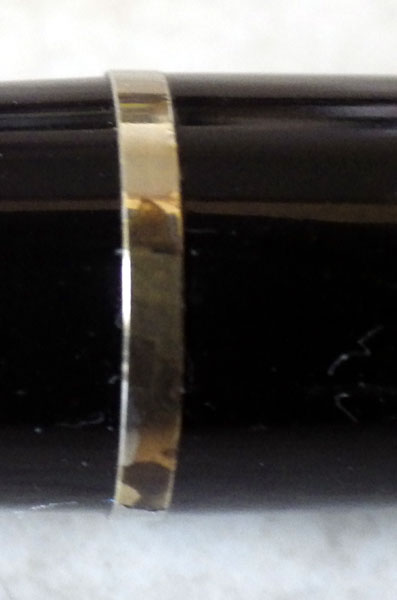 Internally it’s even worse. The Pressac housing has rusted extensively. I got most of the rust off and gave it a brisk polish but it hasn’t really improved it. It works, though, which is about as much as you can ask of a pen of this age and quality. Or lack thereof. All that said, I find myself liking the pen. It’s a good and comfortable writer and it fits the hand well. It could easily be my next everyday writer – in fact I’m sure it will be. To be frank, it’s no worse than many popular low-cost pens and indeed it’s better by virtue of the gold nib.

In the interests of accuracy it’s worth saying that this is the later version. The earlier ones, while no higher in quality, looked a lot better because they had something approaching the appearance of the traditional Conway Stewart clip, whereas this one has a cheap-looking steel pressing.