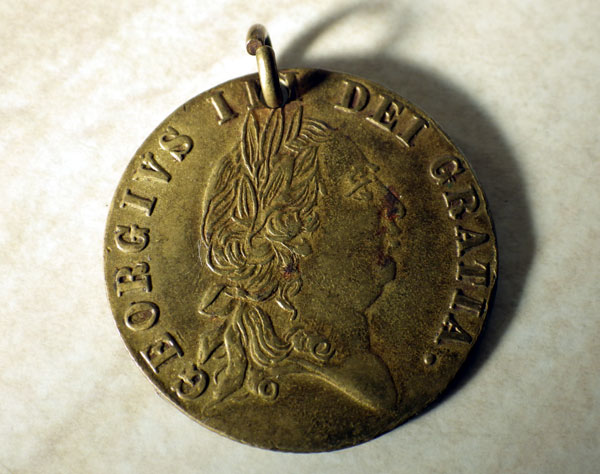 This little disc has been in my desk drawer for years.  I’ve always had an interest in all things Macniven & Cameron and I must have snapped it up either from eBay or a junk shop.  It’s a watch fob, I suppose, and it appears to commemorate George IV.  It certainly wasn’t made  during his lifetime, or even as a mark of his passing.  Though the origins of the firm lie sixty years earlier it was not called Macniven & Cameron until 1840, by which time King George had been dead for a decade.

Why would Macniven & Cameron wish to associate themselves with Britain’s most unpopular monarch?  The answer lies in George IV’s visit to Edinburgh in 1822.  Sir Walter Scott managed the occasion and turned it into a pageant of tartan and misty Celticism.  We may regret its effects a little now, but in its day it was welcomed as it made Scotland the fashionable place to visit.  As a result George may have been remembered a touch more fondly in Scotland than he was in the rest of Great Britain.  Scott, of course, is the author of the Waverley Novels after which the famous nib is named.  It’s worth adding that with their headquarters in Edinburgh’s Blair Street Macniven & Cameron overlooked the district of Waverley or were perhaps a part of it. 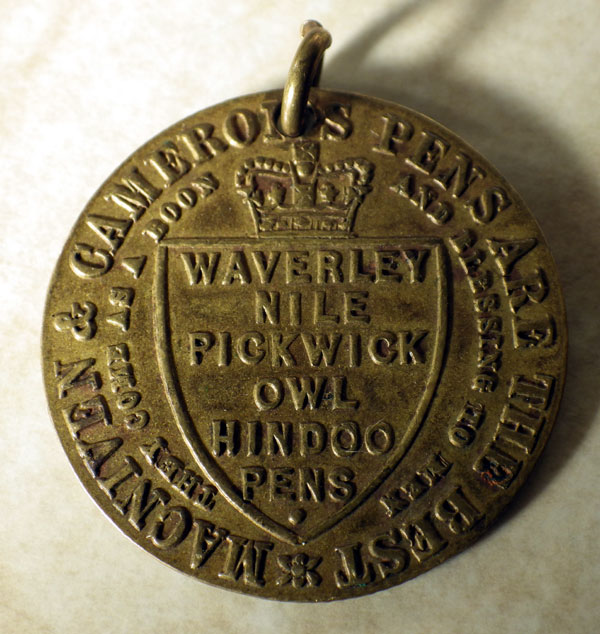 On the back there is a list of pens: Waverley, Nile, Pickwick, Owl and Hindoo.  These names relate to dip nibs – then called “pens”- rather than the later fountain pens which reused some of these names.  Waverely we have already discussed, what of the Nile nib?  After the expulsion of the French from Egypt and their replacement by the British at the end of the eighteenth century, all things Egyptian became fashionable for the first half of the nineteenth century.  Doubtless this nib was first manufactured during that period and the name was chosen as a favourable association in the public’s mind.  It may also suggest that the nib was suitable for use by the colonial civil service in Egypt.

Pickwick takes us back to literary allusions; this time to the Dickens novel which was published in 1836.  The Owl has a couple of possibilities.  The owl is seen as wise because of its association with Athena, goddess of wisdom*.  Perhaps one would write wisely with an Owl nib.  On the other hand, it may be another literary association, this time with Lear’s The Owl and The Pussycat of 1871, though that seems a little late.

“Hindoo” is, of course, an archaic spelling of Hindu which may even be regarded a derogatory nowadays but was probably without such a value in the nineteenth century when this nib was made.  It’s probably nothing more or less than an attempt to break into the immense Indian Civil Service market.  It was doubtless successful.

Does any of that help us to date the object?  Not really.  There’s too much ambiguity.  If the Owl nib related to Lear’s poem the fob could not have been made before 1871 but the Athena explanation gives no guide.  I suspect that it may be quite late, but still within the period when sales of dip nibs formed the majority of the company’s balance sheet.  How about the centenary of George IV’s ascension to the throne, which would been 1920?  Your guess is as good as mine.

*My husband kept a pet owl when he was a boy.  He assures me that an owl is dumber than a log.