What do we have here?  A fine 1920s Mottled Hard Rubber Flat-Top Mentmore?  Or do we…

Did Mentmore ever make a glass-nibbed pen?  They may have done but I’ve seen no evidence to that effect.  But it doesn’t stop there.  The cap and barrel fit together perfectly but did they begin life together?  There’s a distinct colour and pattern difference between them.

Adding to that suspicion is this lever.  This lever with its clover or shamrock, I know not which (this is not a gardening blog) was, so far as I know, a mass-produced part bought in by those who didn’t have the labour or machinery to make parts of their own.  It’s not a Mentmore part, in other words.

Frrankenpen, then, but not much the worse for that. 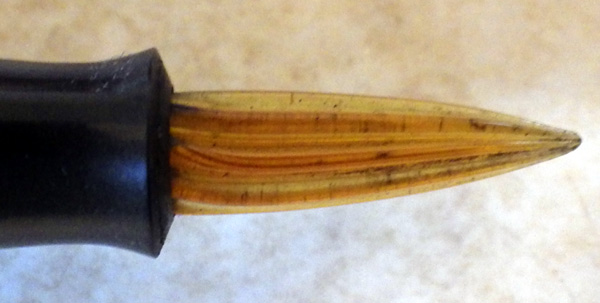 Glass nibs ( they’re really plastic) were a twenties and thirties thing, I think.  It’s often said that they were chosen for their ability to write through multi-part forms and that’s true, but they were also chosen because they were cheap and durable.  A while back I had a thirties German blow-filler with a glass nib, about as cheap a pen as you could get.  Evidently its British owner became a little concerned about using a German pen during World War II, so he scratched off the barrel imprint and carried on using it.

They’re practical and write well, if in a rather characterless way.  I like them as an interesting byway of the fountain pen journey, but not to write with, I’m afraid.