This Geha Schulfüller is a well-travelled pen.  It crossed the Atlantic from Germany to the USA with my mother’s friend in the sixties.  Many years later, when she found that I had an interest in fountain pens she gave to me.  When I married my husband and came to Scotland, it crossed the Atlantic again.  So it’s been around.

Geha is Gebrüder Hartmann, a Hanover office supplies company which went into pen production 1955.  Their big seller was this school pen with a reserve tank which was in fierce competition with Pelikan’s pens for school students.  In 1991 Pelikan bought Geha.  As the pens stopped being made, one can only assume that the purchase was purely to remove a competitor from the market.  Good for Pelikan but not for us! 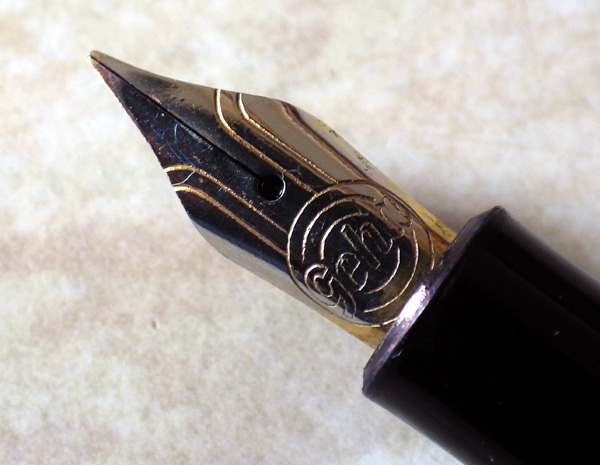 The Geha Schulfüller is a good quality no-nonsense piston filler.  The nib was plated originally but that has gone.  It’s a nice smooth fine.  There’s a green lever in the section that activates the reserve tank which will give another couple of pages.  As there’s a blue transparent area in the barrel that lets you see how much ink is left, I’m not sure why you would let the ink level drop to the point where you needed to call on a reserve, but it was a good selling point for the pen.  The nib is threaded and easily removed for cleaning.  It may be possible to exchange nibs with some of the other German school pens but I haven’t tried it.  The Geha nib is good enough for me. 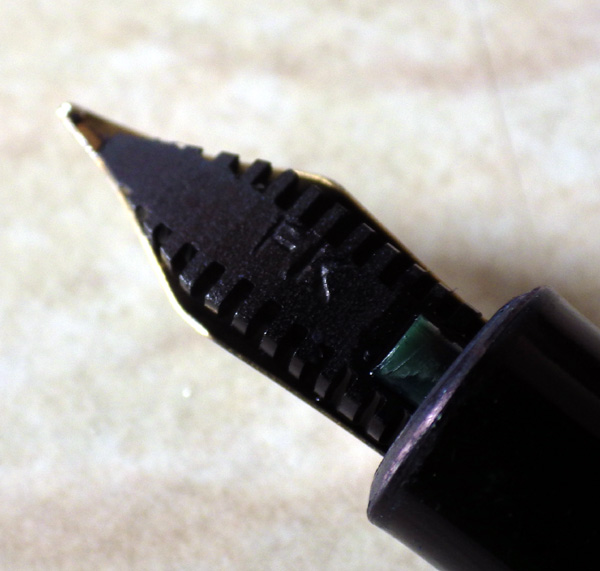 I am assured that some of these plated nibs are flexible, but mine is not.  There’s also the Geha Goldfeder 585, virtually the same pen but with a gold nib.  Gehas are not especially common now but they do appear in ebay quite often and the prices remain good for what is an eminently practical and reliable user pen.