I don’t suppose there’s anyone out there building a collection of Roll-Tip pens.  Beginning about 1951 this London company turned out rock-bottom basic fountain and ballpoint pens in a variety of styles.  The products were price-driven but they did the job well enough for the company to be consistently profitable.  Over time they acquired or became associated with Penkala Pens and Queensway, both well known for lower end mass market pens.  In 1963 a further acquisition placed them with no less a luminary than Conway Stewart, but this was not the Conway Stewart of forties and fifties fame, but a company intent on swapping quality for price.

I’m not sure when this cartridge-filling Roll-Tip was produced.  It’s in an attractive pastel green plastic with a brushed steel cap.  The English-made folded-tip nib is probably stainless steel and has a Parker 45 look about it.  The pen will take small international cartridges.  The cap still fits firmly and the pen writes well. 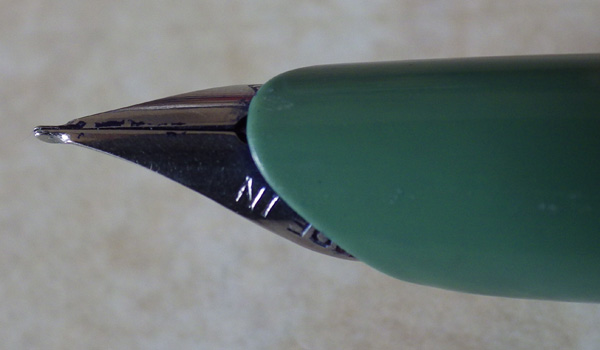 What does one say about pens like this?  Most of the pens that were in this price range have been scrapped long ago, or like the execrable Queensways continue to exist in a ruinous state.  This pen isn’t like that.  It’s in good condition, it isn’t unattractive and it probably shares a level of quality with many modern pens.  Also, it has to be said that these very inexpensive pens probably reflected the writing experience of most people more closely than a high-quality Swan or Conway Stewart.

What does one do with them?  Are they worthy of our interest?  Do I chuck this pen away or do I offer it at a nominal price to anyone who might want it?  After all, it writes just as well as a more expensive pen and it has proven durability.  It would probably make an excellent daily writer until the folded nib finally wears out, but even that is a long time away.