I’ve written about the Boots Chatsworth before. The search facility will find it if you’re interested. Though this pen has the same name it’s completely different from the one I wrote about before.

Boots is a pharmacist that sells lots of other things. At one time it had pens made bearing their own name under the Chatsworth label. I’m pretty sure it no longer does. The pen I wrote about previously was a rebadged De La Rue, and therefore an extremely high quality pen. At some point in the 50s, the manufacturing contract was awarded to Burnham, possibly in a cost-cutting exercise.

Burnhams are very pretty pens, mostly because they used patterned casein which allows for greater colour depth and subtlety than even celluloid can provide. Unfortunately, the casein Burnham used appears to have been less robust and durable than that employed by – for instance – Conway Stewart. You will often find Burnham pens with the disfiguring craquelure that can spoil casein pens and, even worse, some of these pens begin to disintegrate. Years ago, I bought a large box of varied 1950s Burnhams. Many were good but others had fragmented, leaving small jewel-like pieces of patterned casein at the bottom of the box.

Perhaps Burnham bought a lower grade of casein or maybe it wasn’t seasoned long enough. Anyway, that’s the reason you see so little about Burnhams in my blog. I rarely buy them. However, when they’re good they’re good. This Burnham-made Boots Chatsworth is a fine example. Burnham had their own way of doing things. When they have gold nibs, like this one, they tend to be small to keep the cost down. Their sections screw in which makes their removal for servicing easier. Small though they may be, Burnham nibs are good. Size doesn’t really matter except aesthetically. After all, you only write with the last millimetre. 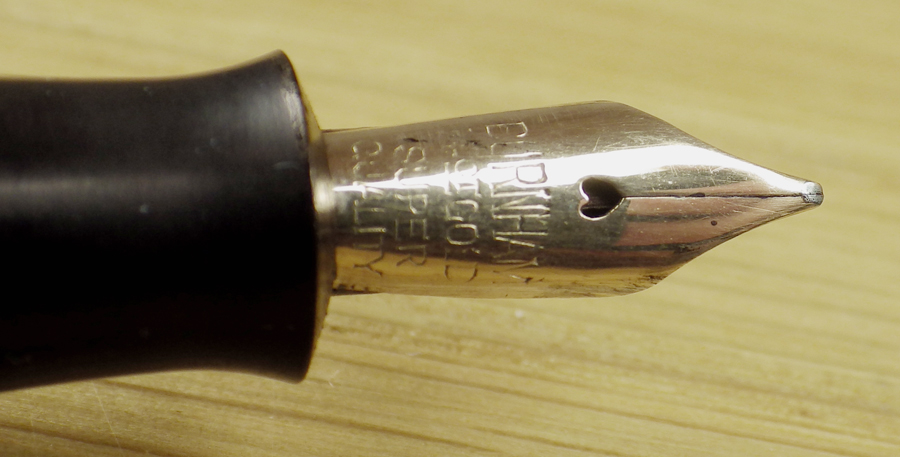 Though the Burnham was undoubtedly cheaper to produce than the De La Rue had been, it is still a great little pen of vastly higher quality than the very cheap items offered by the few stores – WH Smith comes to mind – that still stock own brand fountain pens.

Burnham casein may be an extreme example of fountain pen deterioration but it is a straw in the wind. Eventually, however long it takes, all our old fountain pens are likely to fail irrecoverably. Casein is especially subject to failure. Celluloid is tougher – or at least most celluloids are – but it ages too. Red and mottled hard rubber are brittle and subject to damage. Black hard rubber, as we know, oxidises. We can, of course, improve its appearance by removing a layer but it will oxidise again.

The general point I am making is that our pens, unlike some other antiques, will not endure forever. That makes them all the more precious. We are their custodians and we should give them the best care possible, especially avoiding unsafe polishes, cleaning materials and waxes.

3 thoughts on “The Burnham Chatsworth”