What, you may ask, is that poor thing?  It is, or once was, a Mabie Todd Swan 3161, smallest of the post-war streamlined Swans in black hard rubber.  It has no identification on the barrel and the surface of the barrel and cap is scored with longitudinal scratches.  What happened to this remnant of a pen?  Did someone hurl it into the wood-chipper? 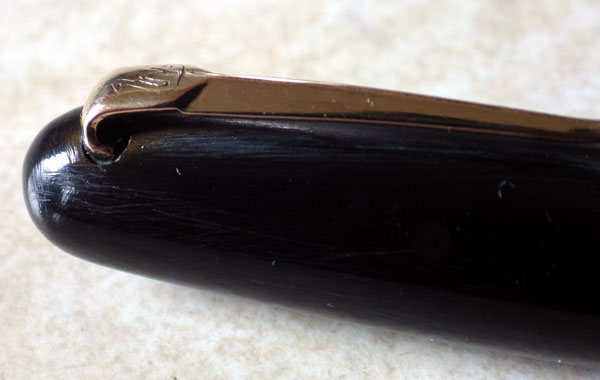 What we have here is what a section of repairers regards as a justified response to the surface oxidisation of black hard rubber; abrade it until you reach a level that is still black.  In the process you remove the barrel imprints and, of course, you do not succeed in eradicating the oxidisation – it’s still there under the clip and around the brass barrel threads where it’s difficult to get at..  You’ve also left a ploughed-field surface.

But hold on, Deb, I hear you say (if you are an abrader of pens) this is an especially bad example, carried out by a mutt who didn’t know what he was doing.  If I (a much more skilled and sensitive pen-ruiner) were to do the job I wouldn’t continue rubbing away with the roughest grade of micromesh until the oxidised surface was gone.  I would judge it so that I would work from roughest to smoothest in many stages, removing the very last atoms of oxidisation with the finest sheet of micromesh, leaving a surface as smooth and black as the day the pen was made.  Of course the imprints would still be gone, and a new surface would be exposed to begin the process of oxidisation all over again.  How many times can you abrade a pen before you rub a hole in the barrel?

This vandalism needs to stop.  Most oxidisation is not unsightly and it can be improved by gentle polishing.  Even handling the pen improves it appearance over time.  The pen is much better in its original condition than peeled like this.  The supply of good quality old pens like this is nowhere near as strong as it was even a very few years ago.  What gives anyone the right to spoil one of the remaining pens in this way, to make it “look better” or, more likely, in the hope of making a few more bucks?  The retort that I regularly see is that the pen is mine and I can do with it as I please.  Legally true but morally malignant.  Anyone who believes that this sort of behaviour is defensible is no pen repairer and no friend of pens or the people who genuinely appreciate them.